Happy New Year to Everyone!

Finalist in the Agricultural Category
Image: Owner of Solan Pty Ltd Ken Morley (left) receiving Finalist award from RDAMR Chairman Mr Neil Martinson.
Solan was selected as a finalist in the Agricultural Category for the Regional Development Australia Murraylands and Riverland ”Smarter Digital Regional Awards”. This was the first time this Award has been conducted in the Riverland Region. The awards sought to find various methods where digital technologies are being applied by businesses and the benefits that have come from this.
Solan’s entry included the development of the Solan website, installation of a programmable logic controller (PLC) in the nursery and it’s linkage to staff to notify in the event of equipment failure should it occur onsite when staff are absent. The areas linked into the PLC include the irrigation system, air-conditioning systems, stirring and exhaust fans, the coolroom and tissue culture laboratory and the auto electrical backup system via the generator. Whilst Solan did not win the category it was encouraging to be listed as a finalist.

It has been approximately 18 months since the newly built cool storage facility was completed on-site at Solan therefore an entire season’s harvest has been put through the cool room. We can say we are very happy with how it is operating and the quality of the tubers after considerable storage time for some cultivars. The decision to invest in the coolroom has been a positive one where Solan has complete control of storage parameters such as temperature, humidity and access. 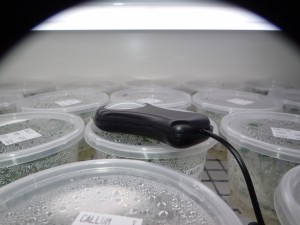 The tissue culture plantlets establish very well under the LED lights and coupled with their reduced power consumption and a working life 6 years they are more efficient to own and maintain. The heat emitted by standard florescent tubes as was originally installed was significantly higher. The new LED’s run cooler which has been beneficial as they reduce the overall laboratory temperature placing less strain on the cooling system and maintaining a more consistent temperature. This assists in reducing pathogen risk and more efficient cooling of the tissue culture laboratory. 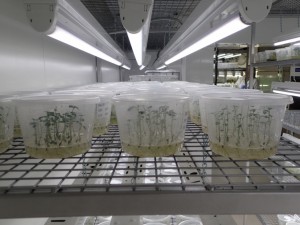 The lights also offer an additional management tool in regulating growth when this is required to speed up or slow down plantlets developing in tissue culture. Potato plantlets are extremely sensitive to light and respond very quickly to changes in their environment and we manipulate the plants responses by changing the heights of the lights. As the lights emit far less heat than traditional lighting methods the lights can be lowered to bring them closer to the tub lids. The ability to do this is quite useful as we have the capacity to slow the growth rate down without fear of burning off the growth tips. The brighter the light around the plantlets the slower they grower, consequently reducing their access to light speeds the plants up and elongates them. Therefore in situations where we require a faster rate of growth we are able to lift the lights a higher distance from the plants encouraging them to reach for the light.
There are some cultivars which traditionally are a compact plant with leaf nodes very close together up the stem. By reducing the light concentration the plantlets receive, we can force the plants to stretch out a little before we sub-culture them which makes the process more efficient with less damage to nodes.

SA Great Logo approval – Solan is pleased to have been approved to use the SA Great logo on our website, digital and printed publications as we are a South Australian Owned, Operated and located business.

Production Time Line: 2016 – 2017
Whilst there is no downtime for the tissue culture laboratory the nursery does undergo a quiet period through from the end of harvest in June to the beginning of August when production gears up again. Solan works a year in advance of dispatching of tubers.
1st May to 30th June 2016 – Receive orders and commence production planning
1st June 2016 – commence processing of orders in tissue culture laboratory
1st Week August 2016 – tissue culture plantlets planted to seedling trays
2nd Week August 2016 – plantlets transplanted to production nursery
1st November 2016 (70 to 80 days ) – Harvesting commences
7th November 2016 – Tubers in cool store until required for dispatch in October 2017
June 30th 2017 – Harvest completed

Genetic Resource Center
The work occurring in the tissue culture laboratory is continuous throughout the year. As processing requirements for plantlets to meet mini tuber orders ceases in March, the servicing of the germplasm in the Genetic Resource Center heads into full swing and continues through to July when production of plantlets for mini tubers again increases. Whilst refreshing of the collection occurs throughout the year, it is finalized during the winter period. The germplasm collection currently includes 281 cultivars made up of both public and privately held varieties therefore it takes some time to work through this sub-culturing and selection of plants for re-introduce into tissue culture. This process has become a major portion of the work the tissue culture laboratory undertakes throughout the year and is increasing as more cultivars are introduced into the Genetic Resource Center for production purposes or as back up stock to another tissue culture facility. 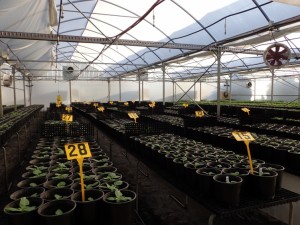 There have been a large number of PBR Trials conducted at Solan this season with 15 candidates introduced to trialing during Crop 25 and their 19 accompanying comparators. Timing this volume of varieties to be ready for planting on the same day for the trial is closely monitored as not all growth rates are consistent across all cultivars and all varieties must be ready for planting on the same day. This ensures trial cultivars are observed at the same time for the recording of UPOV characteristics, particularly the candidate and its comparator. The trial varieties are received either direct from quarantine once they have been cleared of pathogens or from other approved potato tissue culture facilities in Australia. Solan QP’s work alongside visiting QP’s in addition to the examiners who time their visits to Solan to coincide with the recording of the UPOV data.
Lessons Learnt
Planning for crop production cycles through the main nursery area always presents new challenges to work through. Since the reconstruction of the production nursery some years ago post storm damage, maturity differences have become more emphasized with some varieties maturing very quickly. The new polyhouse environment has sped up the rate of growth with harvesting now required in only 70 to 80 days, compared to the old structure where harvest times were at approximately 100 days. This increased rate of growth has emphasized varietal maturity differences considerably coupled with an increasing number of new cultivars being introduced that need to be considered and managed.
We are therefore continuing our work on understanding the growth cycles of all varieties in relation to their maturity and yields and aiming to group cultivars with similar maturity times together as much as possible to make the management of earlier maturing varieties more streamline with less impact on the later maturing varieties. It is important in the polyhouse environment to maintain continuity through the production season to ensure production is maximized and tubers are harvested in peak condition. We are also working this in with client requirements for preferred harvest times so that tubers are field ready as required. 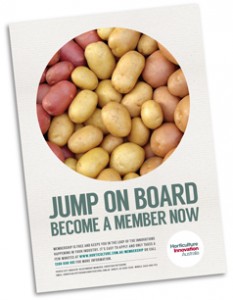 We have included a link below ‘HIA Membership Flyer Potato Industry“. This will open an information flyer Horticulture Innovation Australia (HIA) have asked us to share with the industry.  Membership to HIA is free and will provide members with the opportunity to receive the latest information on Potato Industry Projects and Investment.

As we move along in the new year  all of the staff here at Solan would like to say thank you for your continued support and all the best for a  productive year in 2016. 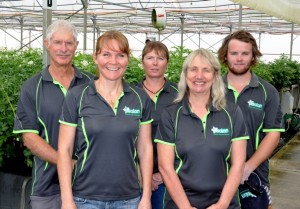