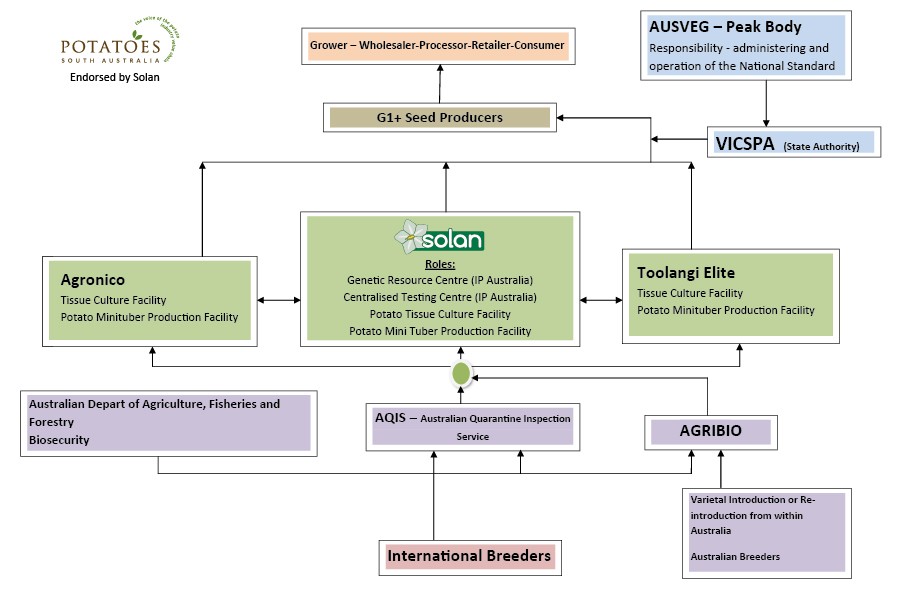 The Australian Potato Industry consists of a highly integrated supply chain.
The beginning enables a broad industry end point – the retail level where consumers are able to purchase potato in its various forms as either fresh or processed product.
To allow a strong and vibrant retail industry, consumer demands must be met. Market research, sales trends and international patterns all influence how consumer preferences are considered and managed which then determines how the supply chain is driven.
Enabling the desired end point in Australia requires all levels of the industry to work together and Solan’s position is primarily in the very early stages of the industry. Solan supplies Generation Zero (Gen O)Mini Tubers to Australian Seed Growers for on selling to potato producers for wholesale, processing and fresh markets.

Overview  – The Process of new potato cultivar introduction to Australia from an International Breeder to a PBR holder.

AQIS holds tissue in quarantine whilst carrying out testing for diseases/pathogens.

The time frame for this is between 3 and 6 months, dependent on the source the tissue has been sent from.

2. Once cleared the tissue is able to be released to an approved source.

4. Once the potato tissue arrives at Solan it will be processed in the tissue culture laboratory and introduced into the Solan’s germplasm collection.

5. Solan follows further instructions as provided by the PBR Holder

Instructions vary, but can consist of all or parts of the following directions.

a) Multiplication of plantlets for Mini Tuber Production – Potato tissue will be cultured in the laboratory into small plantlets for release to the production nursery to produce ‘Gen O’ mini tubers.

b) Processing In-vitro Tissue for Part 2 PBR Trial work in the production nursery.

The aim of the Part 2 PBR Trials is to confirm the variety undergoing PBR is distinct, uniform and stable.

The same process occurs when a new variety is introduced from within Australia. Where a Part 2 Trial has been successfully completed, the PBR Holder will instruct Solan on further requirements for their cultivar. Applications for PBR are submitted to IP Australia. IP Australia maintain a data base on the applications and their status for PBR registration. They also provide information on the process on applying for PBR status.

There are interactions with various governing bodies as shown in the diagram which oversee the industry standards at all levels of the Potato Industry in Australia.

Solan works under the Standards set by AUSVEG – Peak Industry Authority ultimately responsible for the administration and operation of the Australian National Standard Certification of Seed Potatoes NatStand04. The certifying body for the standards set by AUSVEG varies throughout each State.

AQIS and AgriBio follow standards enforced by the Commonwealth Department of Agriculture and Biosecurity.

Together, we contribute to providing potato growers within Australia, certified potato seed.